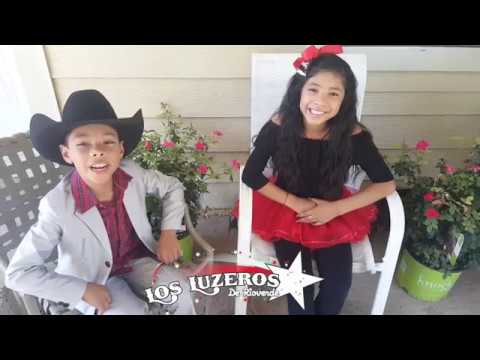 le deseamos mucha suerte Sr. Ramon torres Garcia que Diosito lo Bendiga!! Gustas enviarnos una Cartita o algo? Esta es la Dirección:👇🏼 Los Luzeros De Rioverde 601 West Baker Rd. P.O.Box #1129 Baytown Tx. 77520 Siguenos en Nuestras Redes Sociales : 👇🏼 YOUTUBE OFICIAL DE LOS LUZEROS DE RIOVERDE: https://www.youtube.com/user/RRIJ81 Facebook: https://www.facebook.com/YaxeniyRicar... instagram: https://www.instagram.com/losluzerosd... Snapchat: losluzeros14 twitter:@losluzeros https://twitter.com/losluzeros?s=08 TikTok @losluzeros Facebook: Yaxeni Rivera TikTok @Yaxeni_rivera Nuevo Canal de You tube: Familia Luzeros "CONVIERTETE EN NUESTRO TOP FAN " ✅COMPARTAN ✅SUSCRIBETE! ✅NO OLVIDES TOCAR LA CAMPANITA DE LAS NOTIFICACIONES‼️ Mas Videos Que Te pueden Interesar‼️❤️😉 ❤️ SIGUENOS ❤️ Familia Luzeros In the competitive world of "Norteño” music, one could present them as just "one more group" in this genre, but there is a difference in these individuals, they are a couple of child prodigies who were born in Houston, Texas and who in a short time have become celebrities “We have one hundred percent Mexican blood and proudly follow such customs and traditions like norteño music ", say the children. Their dad explains how their name came about, the word “luz” means light so they are Luzeros with" Z "because they are the light of his family and "de Rioverde” because he was born in the city of the same name in the Mexican state of San Luis Potosí. Their artistic qualities and abilities were ignited at the young age of eight for Yaxeni and four years old for Ricardo when they saw their father interpreting “Norteño" music in public. It is then they decided to study and learn, Yaxeni on the accordion with the help of her mother's hand and Ricardo with the bass that he could barely hold. Their discipline in learning paid off and after uploading a video to social networks that went viral, invitations to participate in various events began. They uploaded more videos to youtube and continued to cause a sensation for their natural born talent. With so much success in social networks, their dad decided to record an album at the end of 2015, titled "Recordar es Vivir” and with other "Norteño” songs of yesteryear, the "Luzeros de Rioverde” were known. It is in 2016 that the Garmex Music label was interested in promoting them and thus marked the beginning of their career in the major leagues of music with the recording of their second album where the hit "El Descendiente" was released, with an intention of moral support to the millions of Mexican immigrants who live in the United States. of Garmex Music in the promotion and dissemination of their songs, "Los Luzeros de Rioverde begin a new phase of internationalization by performing in the most important television programs such as "Despierta América", "Un Nuevo Día", "Sal y Pimienta" and a special invitation from Don Francisco to participate in the broadcast of "Siempre niños", among other television programs such as Telemundo, Univisión, CNN, etcetera ... Television, radio and social networks allowed the rapidly growing career of Los Luzeros de Rioverde and they were invited in January 2017 to the "Grandes Chicos" program in Colombia. Their generosity was evident when they also participated in the Seminary of St. Jude Children's Hospital in Memphis, Tennessee, where the media representatives were surprised by the talent of these young artists. At their young age they have already participated in events in Los Angeles, Atlanta, Miami, and among many other cities. They first traveled to Mexico to participate in the 400" year celebration of the founding of Rioverde, San Luis Potosí and due to the tremendous success they were asked to come back again to perform at the traditional city fair. Yaxeni and Ricardo combine their time with school and music classes because they want to perfect themselves at the events to which they are invited to. They are currently giving the final touches to their third album with Garmex Music, which will be titled "Con sentimiento y amor", where for the first time, they will interpret some songs entirely in English. They are “Los Luzeros de Rioverde